Broadjam Artist: Bill DakeSong: Little JourneyBroadjam Pro Reviewer: Jason Miles (Producer, Keyboardist, Arranger)Pro General Comments: I really don’t know how to take this song. I can only divided into two parts. One the song itself and the duction of… 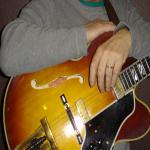 Pro General Comments: I really don't know how to take this song. I can only divided into two parts. One the song itself and the duction of the vocals that go along together with the song. The other would be the quality of the production and what you've got going on. This song needs a lot of work. The track needs to be tighter. It's a little too loose and I don't really hear the base doing anything. The guitar should be much more structured with the parts. Vocal songs needStrong instrumental backing with focus. The chords were all over the place playing different things instead of really finding a part that would go behind the vocal. It just seemed to be like everything was very loose and if you're serious about turning the song is the same thing it just can't be like that. You've got a structure part you gotta have this thing really tight. Drums had absolutely no impact on this song at all and they should obviously you are a clever guy to be able to post something like this together however to make it work is something else. The vocals are all all over the place and they need to be focused better as well. At times you have a good attitude And that should be happening throughout the whole song. The vocal doesn't take me somewhere it just kind of hangs around. Believe me I'm not here to criticize I'm here to help and I'm trying to help by telling you things that need to happen if this song is going to do anything. I doubt that any artist would listen to this in this condition and say oh yes I want to do this song. So as you see you definitely have some more work to do on this. It's just not ready yet for the grand opening

Quote From Pro: The potential for this song is here. There is a certain creativeness that shows this song is not a possibility.