Broadjam Artist: Tim SharpSong: Jose Cuervo on the wayBroadjam Pro Reviewer: Tirk Wilder (Songwriter, Performer)Pro General Comments: Tim,I don’t think your “Jose Cuervo” reference is limiting at all. Anybody who’s ever had a shot of tequila know what … 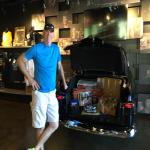 Pro General Comments: Tim,I don't think your "Jose Cuervo" reference is limiting at all. Anybody who's ever had a shot of tequila know what you're talking about.However, there is a big time producer here in Nashville who says if he hears another beach/tequila song, he will throw the CD like a frisbee through the drywall in his office. After "Five 'O Clock Somewhere", and "Some Beach", and many others, Music Row has been inundated with submissions along those lines. And, Tim, I'm talking literally tens of thousands of them. Having said that, I have to refer you to what I said about "I Call Her Fred" re marketability.But this time, you asked me about the writing, and this time, I'm going to address that.First of all, I would suggest you be very wary of saying anything like "everyone loves the song. Many folks tell me it's the favorite one they listen to over and over".There is only one person that it matters whether or not the song effects them in a positive way. I call him TCL, which stands for "The Casual Listener".You have never met this person. He/she has no idea who you are. The only contact they have with you is the 3 minutes they give you to listen to your song. They are predisposed NOT to like it, because they hear a lot of other music, and they already think they know what they like.If you can turn THEIR heads, you've got something.It's very easy to allow yourself to be seduced by the compliments to your stuff that your friends, family, and everybody who you are face-to-face with is going to lay on you. Each one may be worth 99 cents.But if you can get TCL to like your song, be he a publisher, a producer, a music supervisor, what-have-you, THAT can put a significant piece of change in your pocket while it also puts you on a worldwide musical map.When I hear someone say, "Everybody loves this song", I cringe. I don't give a rat's patootie what "everybody" loves. I have heard some of the most horrible crap played for me after that little line has been uttered. Just sayin'.In this song, I have to say that it shows talent way above the usual tripe I have to listen to as part of what I do. You have potential to write a million dollar song, no question. But there are some tools, RULES, if you will, that I might suggest you consider.For instance:You DO use imagery, and you use it well. Your lyric puts me in the spot I want to be, because you SHOW me pictures of it instead of telling me. This is excellent work. You would be amazed at how many people do NOT get this. That one is already in your toolbox, which puts you way ahead.But then you go and stick your hook in the last line of your VERSE.This really takes the punch out of the hook. The only spot it should be in, in this song particularly, is in the CHORUS. You have it there, but it's already lost its steam because of its appearance as the last phrase of the verse.(Continued in "Question" section)

Quote From Pro: Tim Sharp is ON KEY!