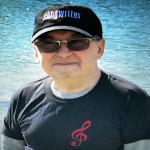 Pro General Comments: Hi Andre -Good to hear from you again. Thanks for letting me know about your re-vamp/redo of your really nice song "Farewell My Angel". Wow, you really did a great job of taking my advice from the earlier Pro Review I did for you. I'm really liking this new version - very nice. I like the Sinatra-esque male vocal a lot (Sinatra is one of my favorites). The vocal sort of has a dry, matter-of-fact sound to it, which I think works well. Also, the new instrumental arrangement and performances are fantastic - great horns and strings.I could see how this song as you now have it might work for a sync licensing deal where the producer, director, or music editor has an actual Sinatra song temped into the cut of their TV show or film, but can't AFFORD that original Sinatra song, so instead to stay in budget, they reach out to you to see if this song could work for their scene instead. To think that your song might work as a substitution for a Sinatra song is, well... very flattering in my book. It might allow you to make some money as well...I really like how this new version ebbs and flows. There isn't really much about it I would change now. I do think the mix itself could be a little better, but what you have is totally fine for most things. If I were mixing it, I'd try and bring out some of the instrumental elements a little more that I feel get lost a bit as it stands now, but... that's being fairly picky it's definitely good. I think the mastering could be a bit brighter and crisper sounding too. I like it overall, but feel there's a little more polishing you *could* do to make it even better than it is (but it's really good now). Again, don't feel you have to rush out and change or redo anything. I'm just making an observation.Overall, great work - and nice job. I think you should submit this one to our Global Music Production Catalog opportunity if you would and I will make sure it gets forwarded to our music library partner for consideration for inclusion in their catalog. I think it'd make a good fit. It's hard to find well-done lounge/big band/jazz type stuff anymore, but you've certainly done a nice job of it here.I can see how what you have could certainly work as-is with no further changes in the exact, right, perfect sync situation it's just a matter of finding it. Being in a library might be a good option for this track as it would then have the potential to get used in a variety of different sync opportunities.This track would also work in the right satellite radio situation and/or retail radio (think Italian restaurants who play background music in their establishment... could work). It might work for a commercial too... the quality is there, in my opinion.Thanks much and best of luck,Doug

Quote From Pro: Andre Kerek's "Farewell My Angel" might just make a nice replacement track for a classic Sinatra song that might not be affordable/obtainable for a sync licensing deal. Andre's track has many of those same elements of the really great 1940's era big band/jazz/swing tunes, that makes me as a listener smile. Nice work, Andre. It makes me want to see the Rat Pack in Vegas now.