Broadjam Artist: Doug MayberrySong: You AreBroadjam Pro Reviewer: Doug Diamond (Music Supervisor, Engineer, Producer, Composer )Pro General Comments: Hi Doug -Thank you for letting me know about your song “You Are”. I really like it. You’ve captured a … 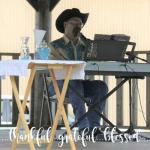 Pro General Comments: Hi Doug -Thank you for letting me know about your song "You Are". I really like it. You've captured a God-given emotional connection that a husband should hopefully have for his wife, and stated it in a way that many men would be able to relate to (I know I do) - and appreciate the true gift a Godly wife really is. Lyrically, you've done an excellent job at making it personal to your own bride, yet universal enough that any husband (especially a Christian husband) should identify with the emotional value put forth in the song, so nice job there.I'd consider this song Country-Rock by the way. The Country genre will be more open to God-based lyrics... Rock... not so much.As a music supervisor, one of the first things I listen for is the main melody or hook in the chorus (because that's generally what most people identify with first) - and you've written a very memorable one from the standpoint of still being able to remember it after the song is over. It's kind of easy-going and smooth with a nice touch, melodically.On the title, I feel that "You Are" is good, but if it were me, in order to give it a little more description and uniqueness, I'd probably call it "You Are (So Precious To Me)" - so there is absolutely no doubt what the song is about. Just an idea... take it or leave it.From a production value standpoint (the technical aspect of the recording itself), I would say it's pretty close. The mix is solid. You can hear everything in its place very well in the stereo field. It's clean sounding and seems like overall it's well done professional.On the performances, the guitar at the beginning (about 7-seconds in) feels a little loose or sloppy and offbeat just for a second or two, but then it locks into the groove just fine after that. Can you move that around in your editor and fix it? I could do that for you if you have the individual tracks. The drums and keyboards are good. The bass is too. The BGVs are good as-is - especially the female vocals. The lead vocal is ok, but to me, isn't *quite* as strong as it could be. It's not bad... not at all. It's just that it could be *better*. To me, it's good, but it's not quite Great yet. See the difference? But I do understand that primarily it's a vehicle to deliver your wonderful message to your own bride, so I get it. I'm not being critical of you, I'm just telling you what I hear and putting myself in the shoes of some of my sync licensing clients (knowing what they look for and like). Likely they would want to hear a completely different singer to give them options. Still, what you have is good and I don't want you to think otherwise. But I always tell people to "remember your competition" because it's fierce out there as far as getting placements goes.I do think this song could work in the right sync context for sure - especially a wedding video. Have you tried contacting some wedding video production houses and playing the song for them? You might find some of them could be interested in licensing usage of the song and recording for some of their wedding video productions. Just an idea. You could work out a blanket licensing deal with numerous wedding video producers, and perhaps have a nice annual check to cash. I'd probably have a simple license on-hand before you approach any of them in case they say 'yes' right away (then, you're ready). Make it simple if you choose to go that route - like an annual fee / then they can use it in any productions they create for that year.That's pretty much everything I wanted to let you know about. I hope that was helpful. Feel free to stay in touch with me via my main site if you like. Thanks again and take care.Best,Doug DiamondDiamondigital Media / Diamondisc Audio

Quote From Pro: Doug Mayberry's song "You Are" is a great testimonial to the loving relationship between a man and his wife in a Christ-centered marriage. This song could easily work in appropriate wedding videos or other music placement type scenarios that evoke similar, needed lyrical content to match picture. It's the type of song that should make a Christian wife feel loved and adored by her husband.